This website titled www.iaewp.asia is the official website of the Asian Chapter of the International Association of Educators for World Peace (IAEWP) – an NGO affiliate of the United Nations (ECOSOC), DPI, UNICEF, UNESCO, UNCED etc. 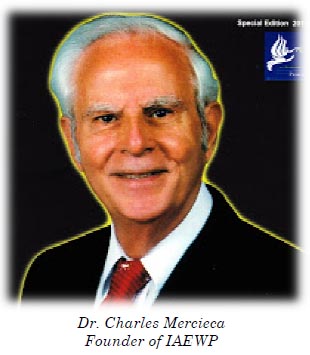 Philosophy and Origins of IAEWP

The International Association for Educators for World Peace (IAEWP) was established in the year 1969 by Dr. Charles Mercieca in the presence of the Representatives of more than 55 countries. The idea behind the establishment of IAEWP was to bring and maintain peace on the Mother Earth by promoting peace education as a mass movement.

The first important meeting and session of the IAEWP took place in Norway in the year 1970 by a selected group of peace educators lead by Dr. Charles Mercieca. It was during this important session that the first Charter of the IAEWP was drafted and unanimously passed with a view to running this important international organization in all countries of the world.

Further details are available from :

9. TREATIES AMONG NATIONS FOR GLOBAL PEACE AND SECURITY

* Invitation from all the following
countries for establishing /
strengthening peace centres
by having chapters /
outfits of iaewp.
Click Here for Details